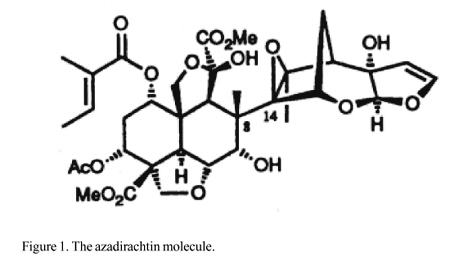 Azadirachtin is in a variety of insecticide products, such as Azamax which can be found on greenmagilabs.com.  Frequent questions about Azadirachtin are: what is it? Where does it come from? Is it safe? And what does it work on?

What is Azadirachtin and where does it come from?  It is a botanical extract derived from the Azadirachta Indica tree.  Azadirachtin is a mixture of compounds extracted from the seeds.  The seeds contain azadirachtin and hydrophobic extract of neem oil, which is often referred to as neem oil.  Azadirachtin belongs to the organic molecule class tetranortriterpenoids.  It is an insect growth regulator, anti feedant and repellant.  Azamax’s active ingredient is Azadirachtin which is why it is OMRI certified for organic gardening.  Azadirachtin is a common preferred method for cannabis growers to safely eliminate Aphids and other pest infestations that would negatively impact the plant and overall yield when it comes to budding.

How does azadirachtin work?  It acts as an antagonist inhibiting the synthesis and metabolism of the insect molting hormone ecdysone.  The hormone is inhibited during the insect’s transition between life cycles resulting in death.  It halts insects from transitioning between the immature and adult stage; thus, it is most effective on immature insects and less so on mature insects or eggs.  It works slower compared to it’s harsh, chemical counterparts as it acts as a stomach poison and is most effective against chewing insects such as caterpillars.  It is most effective in acidic soils.  Foliar applications deter thrips and has been shown to suppress the population of 2 spotted spider mites, Tetranychus urticae.  The list of pests it controls are whiteflies, aphids, fungus gnats, caterpillars, beetles, mushroom flies, mealy bugs, leafminers and gypsy moths.

Is Azadirachtin products safe?  The short answer is yes.  It has short residual activity due to UV light degradation and is less harmful to most natural enemies, such as parasitoids and predators.  It holds a toxic classification of IV, meaning it is relatively non-toxic. There is little chance of systemic buildup in the environment and has very low human/mammal toxicity.  The LD 50 > 5000mg/kg.